Panti Bliss aka Rory O’Neill is Ireland’s foremost Drag Queen, Gay Rights Activist, Performer, Writer, Bar Owner, Businesswoman Extraordinaire or, in his own opinion, ‘an occasionally entertaining annoyance.’ In January of this year, Panti was subjected to the full force of the homophobic attitudes bubbling just under the surface of the open, modern society Ireland likes to present itself as. Here she tells us of how Panti came to be and her experience of ‘Pantigate.’

I grew up, the second youngest of six noisy children, in a small town in the west of Ireland. We lived on the edge of the town with a big garden, fields, a woods, and a slow moving river behind us, and we were a short bike ride to the lake on hot summer days. It was idyllic.

When I was twelve I went with my mother to see the Pope when he came to Ireland. There were hundreds-of-thousands of people, an enormous crowd as far as the eye could see. It was supposed to be this amazing, spiritual, life changing event for everyone—and in a way it was for me. I was completely bored and miserable, cold and damp. The toilets were essentially holes in the ground, already filled with the piss and shit of hundreds of other pilgrims. For the first time in my life I thought, “This is absolute bullshit. This is a con.” Everyone else around me seemed to be buying this crap but it was just another cult as far as I could see.

That day I started thinking for myself, and I’ve tried to do the same ever since. And I’ve never returned to religion.

I did my first drag show as a project in art college, after having spent the previous student summer working in London where I had met and hung out with the performance artist Leigh Bowery. Leigh was a friend of my older brother’s and he—and his incredible costumes—sparked my interest in performance and transformation.

I never kept a low profile, but when I was first coming out in the late ‘80s, the gay scene was very much underground, which it certainly isn’t anymore. And these days, everyone in Ireland has a gay brother or neighbour, or a lesbian aunt or friend, so prejudice is rarely overt or hateful. Ireland has made great progress, relatively quickly, considering homosexual sex between men was decriminalized in only 1993.

When I first started doing drag I did a different character—more “art school arty”—but when I was in my early twenties I went to Japan for four years. In Tokyo I teamed up with an American drag queen, and we started a double act called CandiPanti. 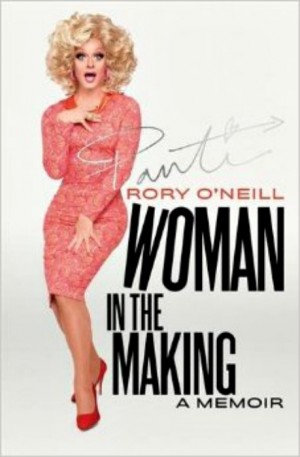 In January of this year, I was interviewed on an Irish TV chat show. During during a discussion about homophobia, I called out a number of well-known journalists and a right-wing Catholic lobby group that campaign against same sex marriage. Afterwards, they took legal action for defamation against both me and the Irish national broadcaster.

During during a discussion about homophobia, I called out a number of well-known journalists and a right-wing Catholic lobby group that campaign against same sex marriage. Afterwards, they took legal action for defamation against both me and the Irish national broadcaster.

Two weeks later, the broadcaster gave an apology on air and paid out €85K in an out-of-court settlement. It became a huge story in Ireland, and the country had a two-month debate about homophobia, gay rights, free speech, defamation law, and the responsibilities of the national broadcaster and journalists. There were parliamentary debates, protests in the streets, and inquiries by the broadcasting regulators. During all of this furor, I gave a speech on the stage of the national theatre which went viral online, and it became a kind of unexpected landmark of the gay rights movement in Ireland.

The speech itself, I actually prepared very little for it. At the time I was in the middle of a political and media storm and was also fighting legal action. I was just trying to keep my head above water! So, I wrote the speech in a couple of hours the afternoon of the day I delivered it. I had absolutely no expectations of it what-so-ever. I assumed the only people who would ever hear it were the five-hundred people in the theatre that night and maybe a few more might stumble across it on YouTube.

It blew up immediately and had thousands of views within hours of it being posted, and it then just kept going. It was broadcast on TV and radio here, and went viral round the world, and it all happened incredibly quickly. I was completely gob-smacked.

There has been a change in the way Ireland thinks about and talks about the LGBT community. Personally, the effect on me has been huge. It allowed me to bring my message to a much wider audience. People take me much more seriously now, in a way they didn’t before.

Live performing is still my true love. And whether it be doing my silly, fun, loose, and unscripted Saturday night show in my bar or a full, tightly produced theatre show, I get the same kick out of it

With these performances, there been so many strange situations I’ve found myself in over the years. Well, recently I found myself at an illegal after-party in a Chinese supermarket, where hot Brazilian boys were selling cans of warm beer out of backpacks to shirtless straight boys on ecstasy and South American trans girls, till the cops turned up, shut it down, and shook their heads at me as if to say, “Panti, aren’t you too old for this?”

I have trouble saying “no” to people, so I often end up doing things I’d prefer not to—but then those are often the things that something great comes from. But, I am also a principled person. I got that from my parents, who always instilled in us a sense of fairness and encouraged us to stand up for what we believed in. That, combined with my own stubbornness, has often got me into trouble, but it has also at times pushed me to do worthwhile things even if there was some risk involved. And sometimes risk is good.

In the past, Ireland has been insular and backwards looking. We don’t like risk. We sweep things under the carpet and hope they’ll get better on their own. I wish Ireland would stop doing that and would face our problems, take charge of them, fix them, and look forward.

In the past, Ireland has been insular and backwards looking. We don’t like risk. We sweep things under the carpet and hope they’ll get better on their own.

For my own future, I just want to keep doing what I’ve always done: performing, not being bored, occasionally getting into, or causing, trouble. It’s a drag queen’s job to discombobulate, to poke and prod, to stand on the outside looking. We are the modern day court jesters, whose job it is to sometimes say the unsayable and tell the King he’s naked. I’d like to be remembered as an occasionally entertaining annoyance.

My future is intertwined with Ireland’s simply because this is my home. And for better or worse, I love it.

I get bored very easily. Not being bored (and not being boring) has been a kind of lifelong mission and motivation for almost everything I’ve ever done. I have started numerous club nights, written theatre shows, moved to Japan, taken drugs, had sex, performed in the day ward of an old folks home, and gotten into strangers’ cars, all because, “Well, at least it’s not boring.”

And yet, I’m most content sleeping with the dog. Go figure!

Rory’s memoirs Woman In The Making  is available for purchase.

This is the personal story of an interviewee, Julia; a visual artist and photographer who speaks about her personal journey into long-distance sadomasochism. He…