7.4
194
SHARES
FacebookTwitterContribute
If you feel like contributing, please send a message to: join@sensanostra.com

Hidden in the corner of the bookstore or S/U-bahn kiosk, tucked away behind Men’s Health and Sports Illustrated, you’ll find the predecessor of internet porn: Playboy magazine. With its iconic bunny logo, a half-naked woman sprawled across the cover, the sexually frustrated (or sexually liberated, depending on your views) literary baby of editor in chief and herder of the infamous Playboy Bunnies, Hugh Hefner, is sure to be found. Although the man selling the copy stared at me with a look of strangled amusement and raised eyebrows, the magazine really isn’t that different from most men’s magazines I’ve come across. Surprise, surprise, it’s actually a magazine with words. Yes, proper articles written by famous and reputable journalists and there are more pictures of clothed people than naked women, so go figure. The theme of the April 2014 issue? Sex & Music – two things (generally) universally enjoyed.

Like most magazines, Playboy has a variety of sections:

The most striking aspect to me about this magazine was how “normal” it was in terms of content and style. Yes, there was a lot of sexual wordplay and an abundance of sexual puns (“[Lina Esco] gets some thoughts about topless equality off her chest”, “[his] flaccid taste in music”, “undress rehearsal”, etc.), but many of the articles were interesting and several of them were also written by women. One of the first pages started with “Hef Sightings, Mansion Frolics, & Nightlife Notes” – something that I thought would set the tone for the rest of the issue.

One of my favorite articles was a column by a guy who decided to work from home and “figured [that his] new life would be manly.” In other words, that

I would be a man of intrigue; no one would ever be sure where I was. There would be mid afternoon workouts, mid afternoon drinking, mid afternoon sex, mid afternoon leaving right after sex because I really have to go do some work now. I would work from mountaintops, South African beaches…the Playboy Mansion.”

Instead, he’s faced with the stark reality of:

And all in the attempt to be manly. And all coming from a lame guy who’s only joy from working at the office was all the women he could flirt with. And now he’s surprised that when you spend all your time at home, you also end up having to do a lot of chores like cleaning and cooking which he claims are making him a “1950s housewife” instead.

The editors like to mix things up, clashing the more serious stories such as a feature on an underground radio station in Syria, with a lighthearted pair of breasts thrown in every now and then. This month’s issue featured Playmate of the Month, Shanice Jordyn, who shows off how well she can roller skate naked and reveals all her secrets in her ‘Data Sheet’ containing her measurements, turn ons, turn offs, ambitions (Playboy will launch her career, she hopes), perfect date, as well as a bedroom selfie (which was surprisingly SFW), a picture at the mall, and a sneaky Ed Hardy ad (“Rocking my Ed Hardy hat!”). Bonus: it comes with a 3-page fold-out poster you can hang up in your room.

Surprisingly, and in contrast to women’s magazines, Playboy featured very few ads. (In Vogue, you’ll easily find at least 1/4 – 1/3 of the magazine contributing to the needless massacre of trees.) Unsurprisingly, the ads that are featured reveal a lot about who the average Playboy reader is and should be. The pie chart below shows the details: 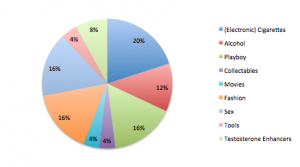 Enlightening and reassuring indeed. As you can see, average problems stressing out your average guy. One starts to wonder what questions the Playboy editors did not deem “reasonable”…

Besides the ample entertainment offered by the advice section, Playboy extends its services to men by providing them with a page full of horrid party jokes that are so awful, they’re more likely to get you laughed at and ignored than at the center of attention. (But just in case you’re desperate, try this one: “Why do blonds look so hot when they drive? They don’t understand how to work the car’s air conditioner.”) Feel free to send your worst jokes to Playboy (jokes@playboy.com) and if you’re lucky, Playboy will pay you $100 to feature it in one of their issues.

While the magazine was really fun to read and I found a lot of the articles to be interesting, it’s also fascinating how the magazine provides a glimpse into American (pop) culture and interests. In a brief interview article, you see how Americans are much more shocked by nudity in the media than Europeans, for example. Also, the topic of drugs sheds light on how the American government is so terrified of the notion of recreational drugs that it refuses to fund potentially important research on how certain psychedelics may help treat psychiatric conditions. And finally, in terms of pop culture, the obsession with Taylor Swift continues with an article predicting who she’ll date next along with some “sample lyrics” of her possible break-up response hits on her hypothetical 2017 album, Chapter 11.

In conclusion, Playboy really is a fun and interesting magazine and I found it to be much more entertaining than the average women’s magazine. Although I do still have zero interest in cars. I just want a Mercedes Benz without the lecture on all the techy aspects, thanks.

194
SHARES
FacebookTwitterContribute
If you feel like contributing, please send a message to: join@sensanostra.com