704
SHARES
FacebookTwitterContribute
If you feel like contributing, please send a message to: join@sensanostra.com

A sperm donor usually isn’t present during the conception of the child. He’s anonymous, a figure apparent only for biological purposes to create life. For Ed Houben, a sperm donor in The Netherlands, this clinical process is not the method he prefers. Ed has slept with countless women, helping them conceive babies of their own. He has one-hundred-two children —that he knows of—living in countries around the world.

Unlike most sperm donors, Ed doesn’t generate a profit. He views his job as an integral part of the creation of life. Ed talks to Sensa Nostra and shares some of his experiences with helping women conceive on a much more intimate level than the average sperm donor.

I got a surprise message from a parent-to-be today. She’s ovulating, so she might be here within half-an-hour. I have so many requests this week. As far as I know there are over one-hundred children, and I’ve met only half of them.

The donation process begins with an email, or they’ll befriend me on Facebook. After that, I arrange a Skype meeting to know the person is serious about their request. Doing this for twelve years, I am so open and honest. I tell people the way it is, my stipulations, what I can and cannot do, and they can ask me whatever they want.

Following the Skype meeting, most people keep me updated about their menstrual cycle and ovulation dates. They test for ovulation several days before it’s expected, so they are sure not to miss it. When it is positive, and I am also available, they come over and we try. Most stay the night so we can try several times to increase the odds of insemination. Those who come from distant countries and cannot travel on a few hours notice can stay for a few days. Like this evening a French woman will arrive and stay until the weekend. This way, we can try as often as possible. With her here, it’s also a chance to get to know each other better—for me to understand her character and vice versa.

I’ve been contacted so many times. Sometimes, couples stop contacting me because they find a closer sperm donor, but I’ve traveled as far as Brazil to help a woman. Women from China want to come see me, you know.

Often, I get emails from men who say, “I like your job,” “I want to do your job,” or “Can I help you with some of the women?” I don’t reply. Maybe there is a good guy that really wants to help, but, you know, if I allow an unknown man to become my Facebook friend he may write to all my females. 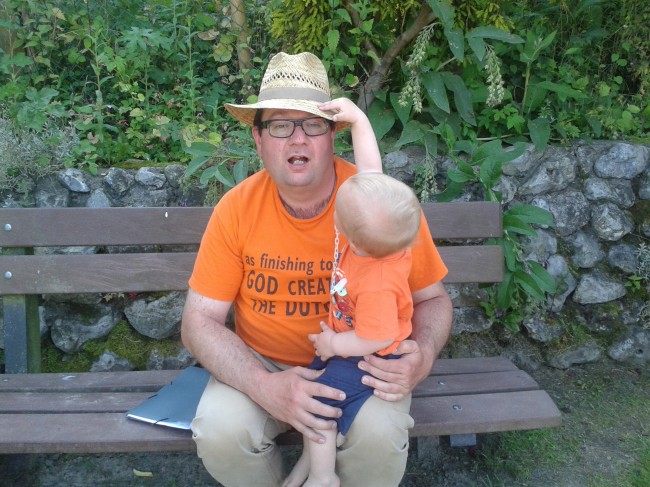 Donor with one of his children

Recently, I appeared on a Brazilian TV show, and, two weeks after the show aired, I received almost two-hundred pregnancy requests. Most of the women I select need to be intelligent, well educated, likable people who take care of themselves and live healthily. So I don’t see why they should miss their opportunity for a child.

One time, there was this one German woman who was totally focused on having a baby, and she was a pain in the ass when she would come here. I thought she must be nervous; it’s logical. But she kept asking the same questions thirteen times just to check if I gave the same answer. Every time she would come here she’d try something new that she’d read on the Internet. Her gynecologist told her to try as often as possible. Never before did I know you could have five orgasms in twenty-four hours.

Maybe I’m oversimplifying it, but for me this is one evening—sometimes thirty evenings—but for a woman it’s nine months of pregnancy. She goes through sickness, birth, taking care of the child. It’s a big emotional investment, and what I do is completely nullified by that. I see pregnancy as their achievement, not my own.

Last week I got a card from France from the latest baby that was born, which made me so happy. But sometimes, after such a high, you can get a card from a woman who had a miscarriage. If something bad happens like a miscarriage, I try to talk to the woman. I see it as part of what I do because I don’t want to operate like a business. For people like that, especially single women, nobody may know they’re trying for a baby. They want it a surprise, and, if something unexpected happens, I may be the only confidant.

I first started thinking about what it meant to not be able to have children in my late teens. I had gotten to know a couple who were older than me and had been going to clinics throughout Europe in hopes of finding a sperm donation. But this couple didn’t want the confrontation of going to clinics. I thought they were good people who I knew well and who would be good parents. It’s basically something you don’t think about at that age because you think everyone can have children, but you don’t see the pain that goes on behind closed doors. After that, I considered, for ten years, thinking about donating. I felt a bit naive.

At twenty-nine, I wasn’t in a relationship serious enough for children, so I thought maybe I could help others. I went to the local sperm bank and they were happy to have me. I didn’t know then, that already in The Netherlands many sperm donors were quitting the sperm banks because they had heard the political discussion about cancelling out anonymity. These donors were afraid of being hassled later on for money or by children. I see it differently. As I see it, I’ve created these people, so I don’t think I have the right to refuse a child from meeting me.

I never looked for a relationship in this. I never wanted to give women the feeling that I want a relationship. Six to seven women have told me they love me, and I’ve had a long distance relationship with maybe three of them. They were a bit older than me and didn’t get pregnant, and they got jealous of the other women who did. I did not love them, but one of them even said out of emotion, “If you loved me you would give me a child.” Another time one woman from Eastern Europe asked me to stop donating. I’m exaggerating, but basically she said, “If you love me, stop donating.” I’ve had so many experiences like that.

In society it’s very male-orientated where men have to initiate romance. I, basically, have to have a huge, diamond ring ready or something like that. If I find the woman of my dreams and she wants me to stop and we move in together, then I’ll stop at a moment’s notice. Just know that you’ll have to be here with your suitcase on the doorstep because I’m not going to cancel my contacts, thus, destroying the hopes of dozens of people. I don’t do this for sex, but, if you want me to stop, first prove to me you’re serious because, say, two weeks later, I say something wrong, and it’s PMS for you, you end the relationship. This is not a game. This is something important. To the children yet to be created, it’s their life.

For those interested in Ed’s services or to learn more about his services, check out his site: http://www.edhouben.eu/

704
SHARES
FacebookTwitterContribute
If you feel like contributing, please send a message to: join@sensanostra.com

Mirza, 29, is a Berlin-based bar owner. Born in the town of Cazin, in the northwest corner of present day Bosnia and Herzegovina, his…