499
SHARES
FacebookTwitterContribute
If you feel like contributing, please send a message to: join@sensanostra.com

Eva and Flame introduce us to a style called cyber goth. This article begins with a partially-true, semi-unbiased and totally non-sarcastic history of Cyber-Goth. After that, voice is given to both Eva and Flame to talk about their individual styles.

The Cyber-Goth style is really the bastard child of the goth and rave scenes. Too dark for the ravers and too colorful for the goths, it’s had a difficult childhood and it continues to have a strained relationship with its other inbred cousin sub-cultures.

With such a small community some Goths have encountered the problem of other goths “stealing” their individual style by wearing the same store-bought Gothic outfit. Unlike the old-school Goths who have a tenancy toward clothing that is blacker than Dracula’s soul on a moonless night, the Cybers like a little color in their outfits (sometimes they even get a carried away with the color and forget the black entirely). This introduction of color into their wardrobes has served only to exacerbate the style theft problems within the Cyber-Goth community, with some callous Cybers actually daring to steal someone else’s color. 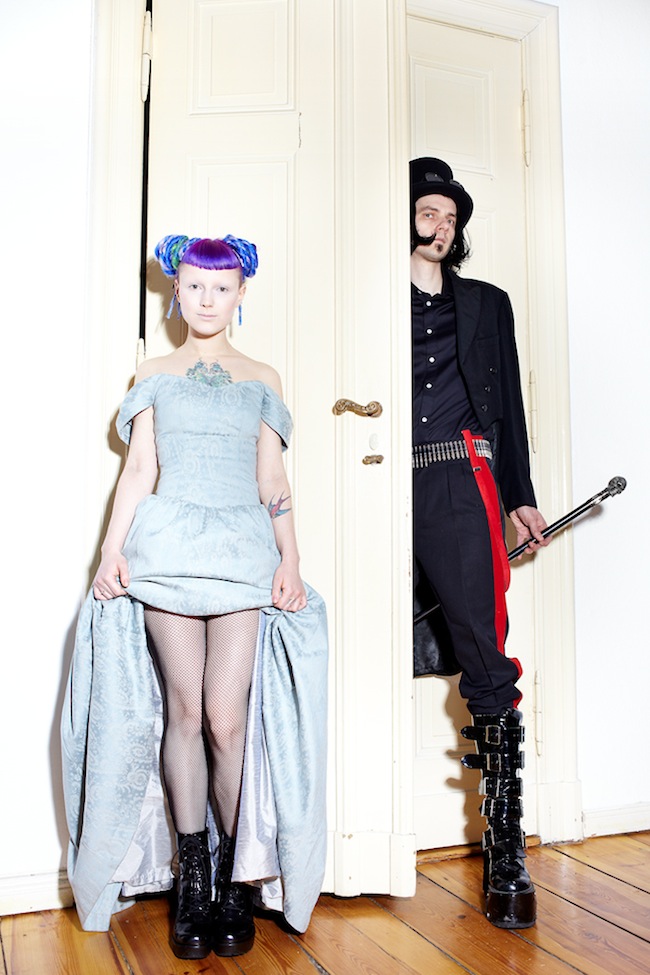 Even though the Goths like to think of themselves as non-conformist who value free expression, they are, in reality, only truly accepting of those who choose to express their non-conformity in a way that conforms to the very narrow image of the one true goth.

At Wave Gotik Treffen (the worlds largest Gothic festival), I once saw a group of non-cyber-Goths yelling and throwing handfuls of candy at the Cyber-Goths as they walked past. At first I thought it must have been some strange German cultural thing that I didn’t understand (like pooping on a shelf). I was even a little insulted when they didn’t throw any candy at me. But eventually I realized the candy throwing was a form of bullying and they probably just didn’t throw any at me because I reminded them of the kind of creature who might rip out your spine and hang it from a tree. 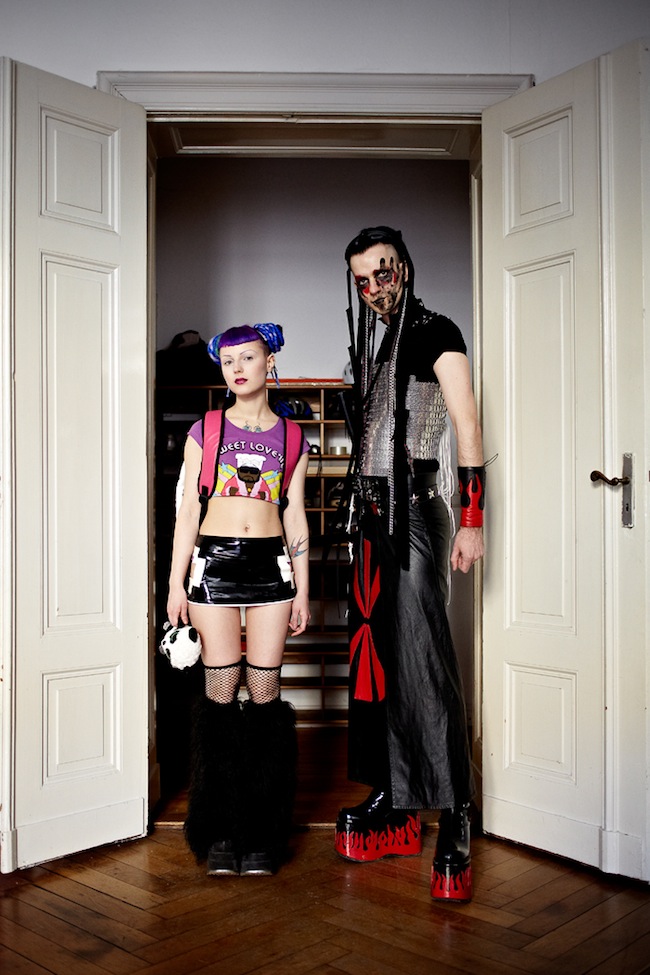 And then in Latvia I was told I was too mainstream because I was DJing “popular” industrial dance music in a nightclub. It seems that I needed to dance in a barn, experience true suffering and apparently get mud and cow shit all over my platform boots before I could possibly understand Industrial music. But damn it I’ve suffered, I once narrowly avoided having candy thrown at my head, just how much suffering do I need to do?

So with the real industrial music scene happening out on the farm, and the aging goth population steadily abandoning the clubs to stay home and watch the Adams Family with their grandchildren, there was a void to be filled. But rather than accepting evolution the Gothic dinosaurs chose their own extinction by pushing away the emerging Cyber-Goth culture.

Bela Lugosi’s Dead, and so is the old-school goth scene (and if you don’t get that reference you can’t be a real goth). Apparently some of the goth clubs must have missed the obituary because they’re still proudly proclaiming 20 years of playing the same old shit and cramming their event calendars with retro and 80s nights. Still playing “Grandpa music” (as my 21 year old wife describes it) and wondering why the goths of the facebook generation are clicking the like button but not actually coming out to the clubs. 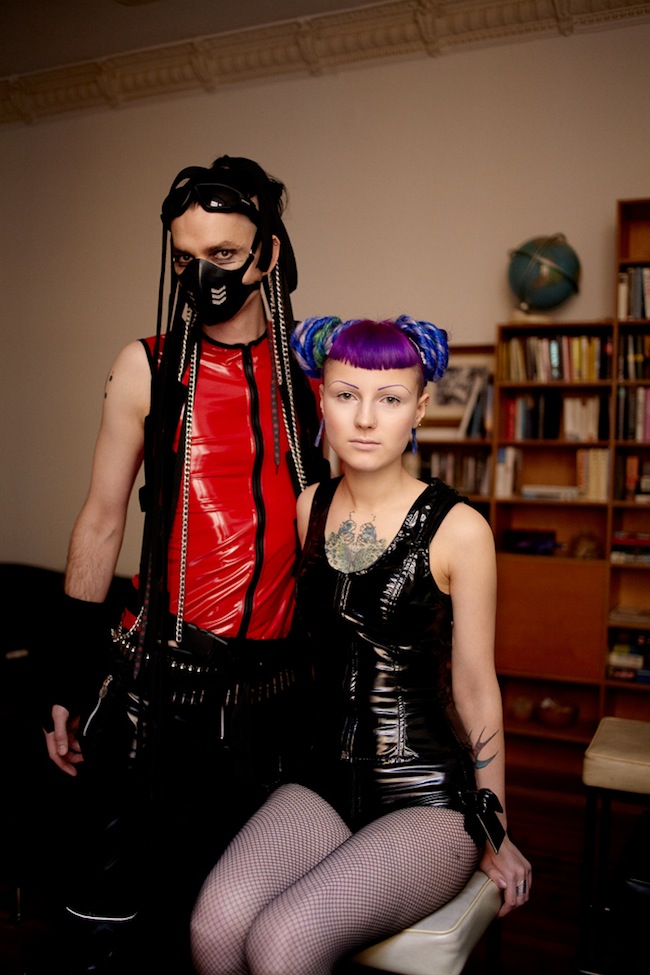 The overwhelming evidence from youtube videos would suggest that with few clubs of their own the Cyber-Goths have had no choice but to take there glow sticks to the street and dance there in protest until the old-school grandpa goths stop just writing poems about death and start hanging out in cemeteries on a more permanent basis.

Oh, and I didn’t mention the Bubblegoths and Hello-Kitty-Goths because they’re not real goths. One of my phyco-ex-girlfriends (yeah, I’ve had more than one) told me they are all just a bunch of posers who only like whatever is popular. According to her you can’t be a “Real Goth” if you like anything popular, or something like that, I wasn’t really listening because I was too busy filling out the paperwork for a restraining order on the crazy bitch.
Eva 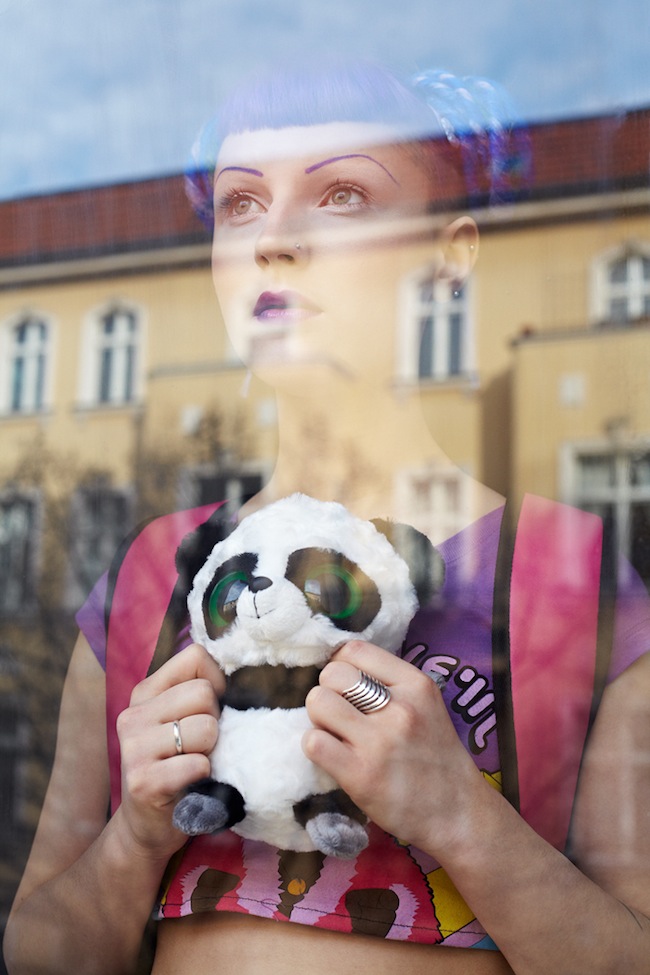 I am from Latvia, and now I live in Berlin with my husband, Flame. I would probably describe myself as a “twisted, gothic spice girl”. What I wear I a mix of darkness contrasted with a splash of childishness. This fusion of styles gives my ‘look’ visual strength. I like to unite different aesthetics such as fetish and cyber or fetish and feminine. This mixing keeps it interesting for me and allows me to get creative with my image, which also makes my appearance a thing of intrigue. 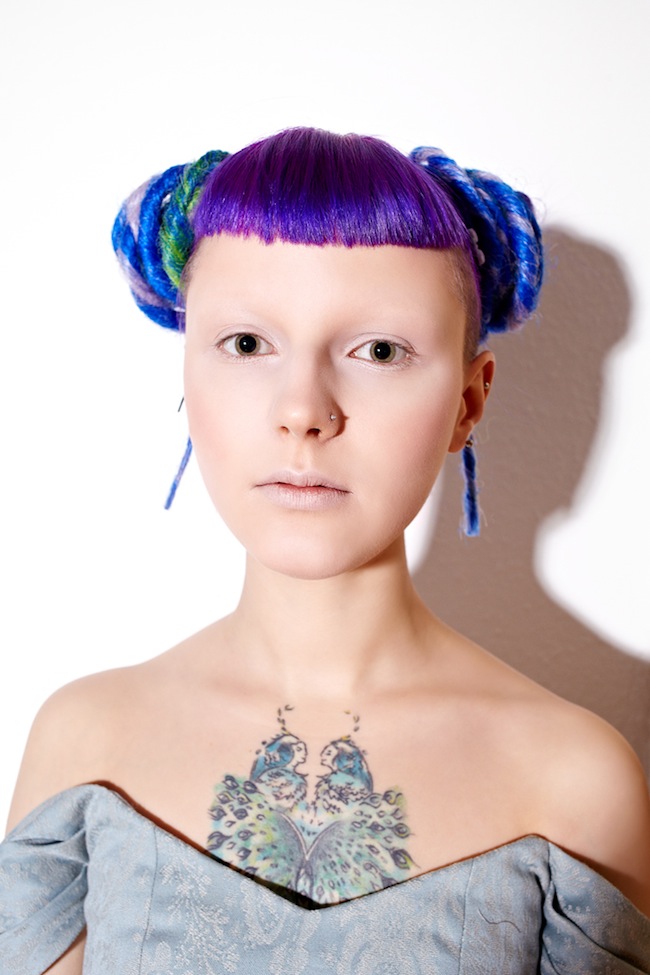 My style has many influences but if I had to pin down, it would have to be an Estonian singer called Kerli, but I am inspired by her appearance and not her music. She knows how to push the envelope whilst keeping it feminine. Continuing on this fusion thread, the music that I am inspired by is quite the eclectic collection. To name a few I love the groovy/trippy aspect of Infected Mushroom’s sound, the obscurity of Die Antword but also my dark side is influenced by the more old school sounds of Depeche Mode, although I am not too into “old school goth”. In fact the whole “black goth” thing has never interested me, but its darkness is the basis of my fusions. You can call me a cyber-goth but I like to use the term bubblegoth’ because that implies that I incorporate candy colours and playful details in my fashion. 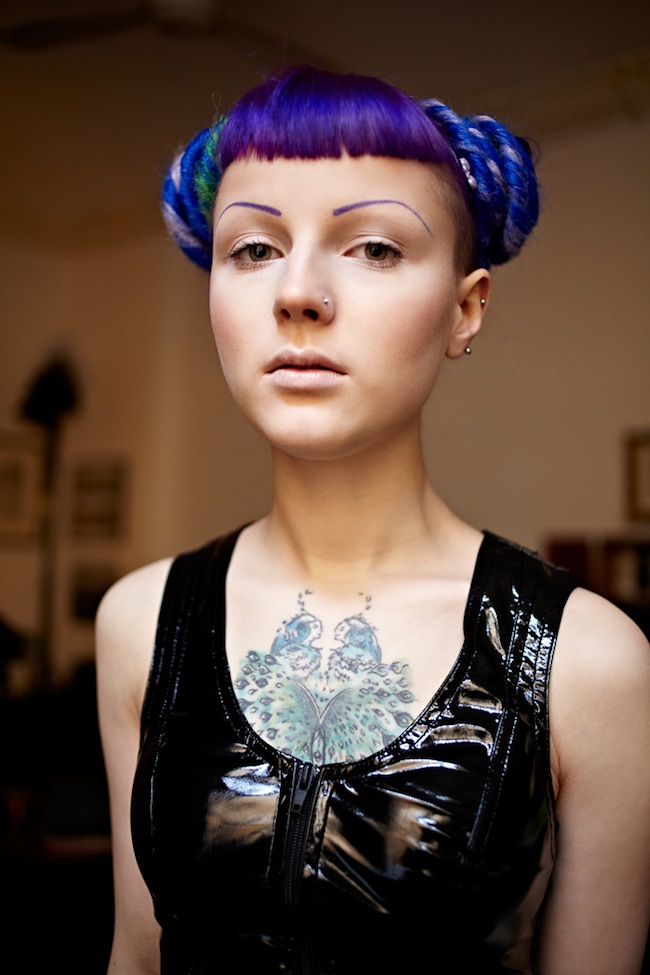 I was not always like this though! In fact, when I was younger and when had control over my style, I lived in a small town so I began my style-evolution as mainstream hip-hop chic (jeans, nike trainers, hoodies and the like) but then progressed into the skater-girl image. That was my gateway to the alternative scene. It was in my late teens that I attended art school, which gave me the space that I needed to push my image and start experimenting with my style fusions. I have had this cyber-goth look for the last two years and I am really flexible and comfortable with it. I also have a growing interest in the fetish scene that Berlin is great at feeding! I’ll let you in on a little secret; I am currently planning to start up my own latex fashion brand that will make latex a little less fetish and a lot more wearable. It is to offer something to those who have an interest in fetish but may lack the confidence to commit to the extremist nature of the style. Everyone loves a bit of latex!

I know what and who I am which shows by the way that I project my interior, using my exterior as a canvas. The way I look is not just ‘style’, it is also an indicator of my lifestyle choice. Non-conformist. 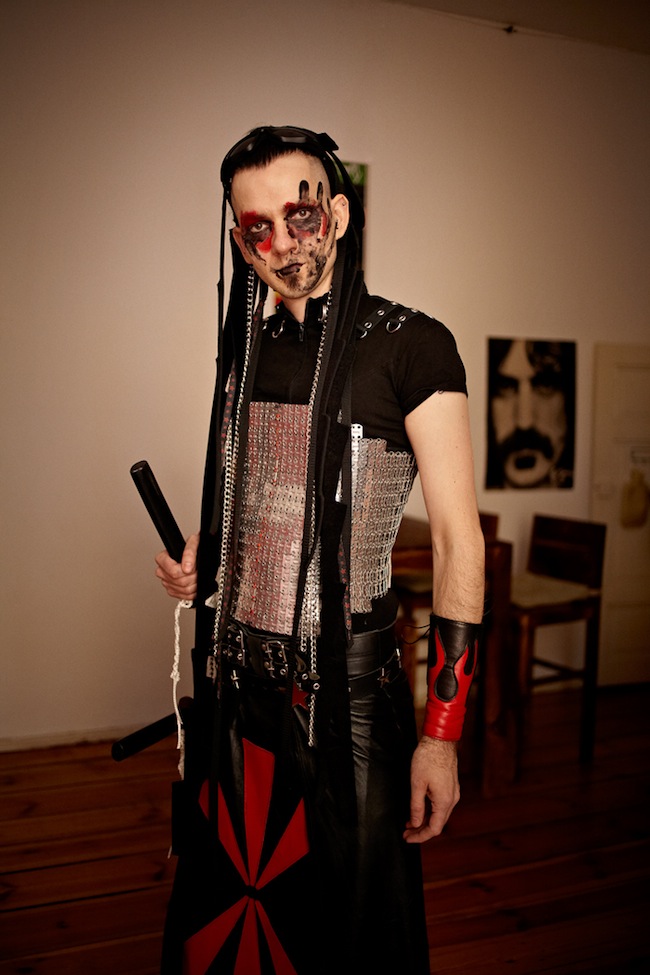 I am originally from Australia, and I now live in Berlin with Eva. Over the last 5 years I have run several of my own clubs, have been a DJ in many clubs, and have travelled to Gothic/industrial/EBM/EDM clubs, concerts and music festivals all over the world. In Australia I was known as “Melbourne’s most notorious Goth/Industrial DJ”, in Latvia I was acrimoniously dubbed “The Industrial Messiah” and in London I was called a “pretentious cunt”. There have been all sorts of vicious rumours spread about me, some of them are even true but I’m not going to tell you which ones.

I have a lot of different styles but my predominant style would be best described as post-apocalyptic-cyber-gothic. I like to look like something most people would only ever expect to see in a film or maybe a nightmare.

I started to be influenced by the Cyber-Goth scene in Melbourne when I was living there, and as I have travelled around the world, I have picked up little bits and pieces to add to my outfits. 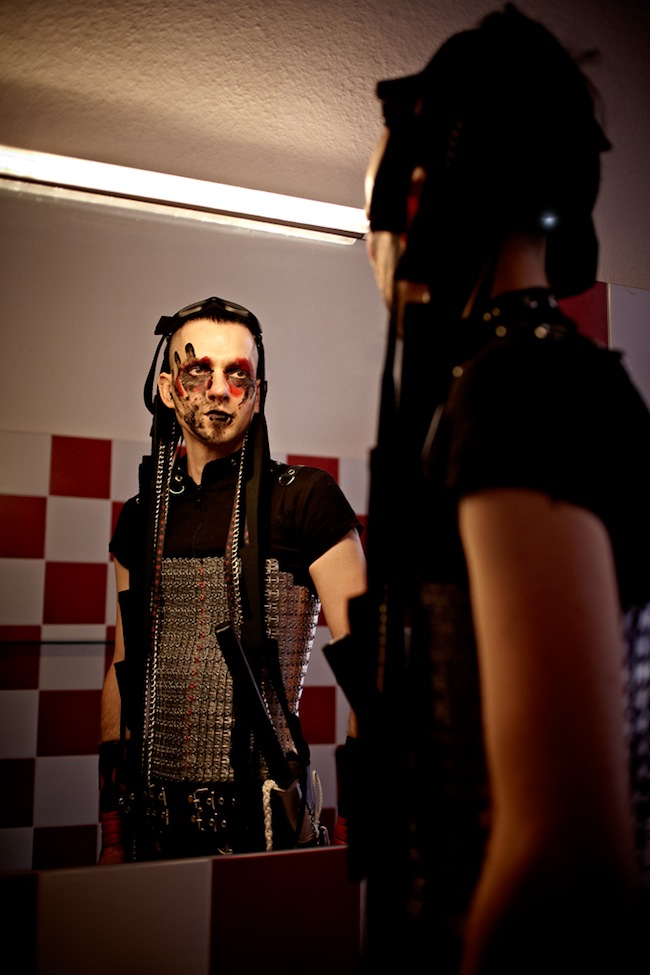 I do like a lot of the Cyber style, but in general I try to go for a darker more aggressive post-apocalyptic style. When I first started to see the Cyber-Goth style I really liked the hair extensions concept but the materials they are traditionally made form didn’t appeal to me so I got creative. I’ve mostly made them from scavenged offcuts or industrial hardware, rubber strips, plastic tubing, wire, bandages, chains etc. Inspired by the rave scene my current extensions are long strands of battery powered glowing wire, and have become part of my signature style.

I have also taken inspiration from anime, comic books, films, music videos and computer games. Bands like Rammstein, Combichrist, Kiss and Skinny Puppy have all provided some influence, along with films such as Tank Girl, Predator and even Lord of The Rings. I will often take several concepts that I have seen and twist them together or use them in an entirely different way. For example, when I needed to dress as a clown for a Placebo gig I took the idea of the “white hand of Saruman” on the faces of the uruk-hai in LOTR and used a red hand print on my mouth combined with elements of the Jokers makeup from Dark Knight. I liked how the hand print looked so I have evolved that and used it as part of my makeup for other outfits. I’ve also taken some influence from the fetish scene, latex & leather clothing, whips and chains, that sort of thing.

I guess I’ve really had a lot of influences from many of different places, but often the most striking aspects of my style have come from random things that I have found or bought and then just played around with to see what I could make from them, for example my metal armour corset which I made from 2 sections of an aluminium butchers apron. If I cant find what I want, I simply make it!

499
SHARES
FacebookTwitterContribute
If you feel like contributing, please send a message to: join@sensanostra.com

We interviewed Ivo Dimchev, the creator of an online magazine, Stereofox. We discovered that he is not alone in his quest to get back…