Turning feelings into zines is what one woman is doing to help cope with mental illness. In Berlin for a workshop called ‘Mini Zines, Big Feelings’, mixed-media artist and illustrator Carolina Hicks (working under the name Subtle Ceiling) teaches groups of people how to compile drawings and words into a small-scale magazine. She speaks to Sensa Nostra about her DIY approach to mental health and describes her personal story dealing with depression and anxiety as a teenager and through adulthood.

My depression started pretty vividly when I was about twelve: pre-womanhood. I remember it was all triggered very specifically by a conversation I was having with a woman who was talking to me about how a meteor was on its way to earth and somehow bypassed the earth and that we could have all died. I’ll never forget when she introduced this idea of space and the tininess of humans– that conversation really fucked me up. Conversation can be like an LSD drug– like, life changes after these events. I started thinking about infinity and what that word meant and eternity and it was like this really intense black hole of thinking about myself that was all triggered by thinking about space. 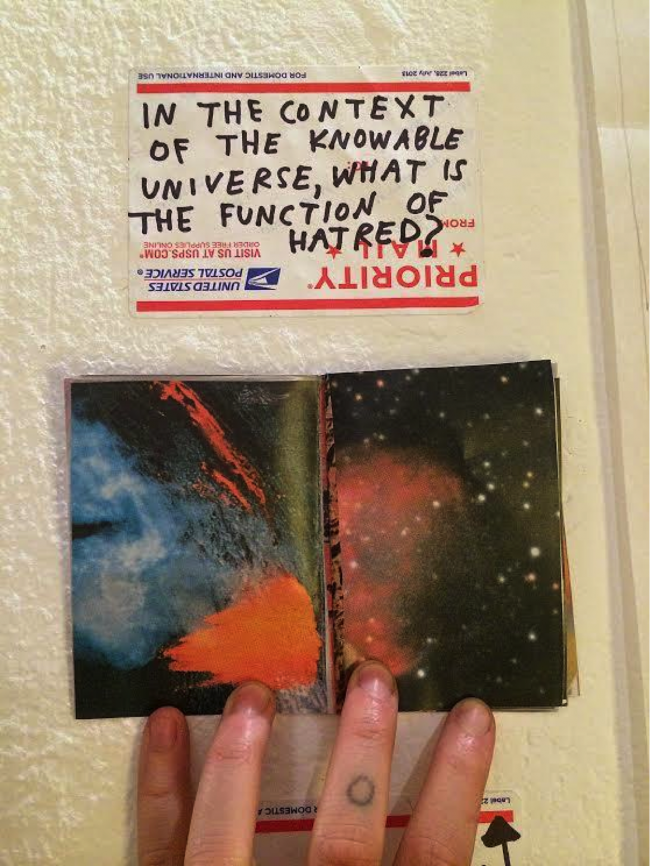 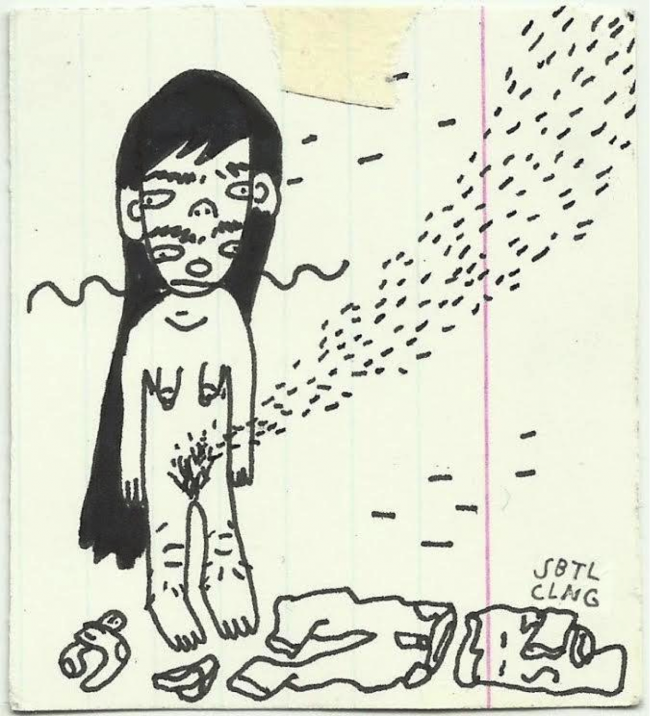 About two and a half years ago I found an instructional mini zine on how to make mini zines. I immediately used it and I worked on it that whole night. I was fascinated by how into it I got– it felt very special. I realized the potency of these mini zines by how small their format was and how much you could fit into such a short amount of space. I realized how much they were helping me through really dark periods of depression and anxiety or struggling with substance abuse. I was able to reflect on these really low points with the help of the zine, and I started making the connection between making zines and helping myself. That’s when I realisƒzed how powerful these zines were.

Afterwards, I thought it was somehow important for me to pay my dues for all the inspiration and help so many different zines have given me, so I started teaching people how to make them. That’s how the concept came for the workshop Mini Zines, Big Feelings. I realised that zines could actually be a big thing for many people and not just entertainment, not just band reviews, not just funny drawings, but truly a tool to work through various uncomfortable feelings.

I learned pretty prominently I think last summer when I was living in Vancouver, BC that zines were helping me. In retrospect, I was pretty mentally unstable and feeling very low and making very weird social decisions. Then when I began to look back on the zines I was making, I realised I was really trying to talk to myself into getting better. I think it’s in these low moments when I can look back on my life and see that these things I was making actually had something. It’s almost like when you are making these zines you are kind of giving yourself instructions on how to get better.

It’s a really exciting feeling because sometimes I don’t feel like doing it. Frankly, I’ve been feeling really depressed, low, lazy. But then when you start going, all of the sudden this image turns into that image and the feeling of satisfaction is so unlike anything else. To start with a blank page and transform it into something that you translated from your mind and emotions is really special and its particularly satisfying if the feelings are negative starting off. If anything it’s quite a relief after, maybe not necessarily a cure to the feelings, but most certainly a physical form of relief. I think of very negative self-harming habits that you can do to yourself and I couldn’t think of a better, more positive replacement of that.

A Spanish man who now lives, and runs his own business, in Berlin explains his view on the Spanish crisis. He left Spain seven years…