It is funny how everybody is trying, oh, so desperately, to express their individuality, to scream out loud “I AM, THEREFORE I AM!” with every cell of their being.

Too bad that everybody involved is doing so in an identical fashion.

Convinced of their originality, I watch individuals roam the streets in mirror-image outfits: I do not recall the last time that somebody has fucked me in the brain and that I would’ve liked it. My hunger for new sensations goes unnoticed in the grayscale reality of the nullity of the peisage that opens up to me as I push open any door to any public space.

It is peculiar to observe the silent death of intensity. Mesmerized, I float through the digital desert, where a shallow conversation is met with foam at the corners of one’s mouth but an honest question or remark results in a flaccid eye expression. But then again, is there anything wrong with having nothing to say?

I pull my chair in. Hipsters, the eternal interns are serving cappuccino art as their only means of self-expression or a justification of an art degree. I only hope that a philosophy student might perhaps fill up my glass with water and leave it half empty (or half-full).

The emotionally castrated children are hiding in the arms of Mother Night, shuffling and sniffing out the odor of her armpit until their noses bleed.

I am awoken from my daydream by a man trying to win me over with a boasting showcase of his “PRESS” bullet-proof vest. He is a journalist. Perhaps, this is the only identity that he will ever have, along with all of the clichés that come with it. Bored and sleepy I am laying on the bed gazing out of the window into the sky, detached, with the corner of my eye observing him waving his vest as a flag, a sort of symbol of the altruism, the bravery of the profession. Lost in his flood of pride, standing on an imaginary pedestal, his train of thought takes an unfamiliar spin:

“… and just get wasted and take a lot of drugs.”

Che Guevara just had a fight with H.S.Thompson.

“One does not need a bullet-proof vest to get drunk and drugged up.”

My remark is met with neurotic laughter. He turns around to hang the vest where it belongs – in the wardrobe.

I watch his back thinking that if dogs could laugh, I would imagine that they would laugh like this: while running away with their tails between their legs, protecting the view of the observer from the fact that their balls are, alas, minuscule.

I am truly bored of the prancing and jolting brains that keep on coughing up a coda designed – not even throwing it up, because then, at least, it would add some drama to the neutrality of the dry bacteria-infused breath that they spread. Every selfie taken is a cough into your phone camera. Flip your smartphone over and continue, desperately continue on consuming shit, consuming information, consuming factors of cool, consuming individuality that was tailored for the masses.

Me! Me! Me! screams the virtual reality that has made a quick jump from “a free expression of the human sub consciousness” to “a mass media information construct”. And isn’t it like life, really? Like a jump from the womb of your mother to the grave, inevitably?  About to fall backwards from the thought of having to live in these circumstances, I follow the white rabbit who takes me to Kharon, cunningly disguised as an aural hallucination of Pelevin’s voice. Inside my head, I despondently attend to my verdict:

“From the standpoint of bourgeois point of view every man is a call of an organism, which is called Economy.

Each of those cells, that is, each individual, when regarded as an economic entity, possesses a kind of social membrane that allows money to pass into and out of the cell. This process is controlled by the nervous system of ORANUS – TV and mass media, where a person’s identity is gradually displaced and an individual becomes a program watching another program.

There are three types of pulses transmitted by ORANUS throughout its virtual organism :

from the commercial ejaculation “wow!”

Homo homini lupus est, as some inspired Latin saying has it.

But man has long ceased being a wolf to a man.

Man is not even an image maker, not the dealer, not a killer and not an exclusive distributor, as some modern sociologists assume.

It is far more terrifying and much simpler than that.

But not to man even, but to precisely another such “wow!”

So, projected on to the modern system of cultural coordinates,

I shoot up, I open my eyes wide and gasp for a breath of fresh air which is laced with the smell of shit.

Is that maybe why everybody jumped on board for the fashion of black beanies indoors – to cover their heads in shame?

Peter Pan is sitting on the stool beside me, but his face looks morose because he has been trying to keep an infantile brat inside of him for too long.

I notice that it is getting harder and harder for me to get truly excited about something. The remix on the radio has been on the loop for way too long. I stare at myself long and hard every morning: maybe I’ve changed; maybe I reside in a parallel reality. Is it us or is it them? Do you feel electricity from a human touch? What danced behind you unnoticed?

Can be that you are not made for that kind of interaction. One should always take the chance to pursue the role of the dreamer if that fate ever does fall on your shoulders, and you can forever walk the streets like a modern Theseus, smelling out the air for invisible strings in hopes of committing crimes.

Because nothing is new anymore, nor is it old. And apathy washes over you. And you cannot really laugh anymore. And life has lost its magic touch.

But then, you see a photo. And the in-kept laughter erupts in you, as you shoot your head up high, you finally give in to hysterics.

And you know that all is well.

all is good in the world. 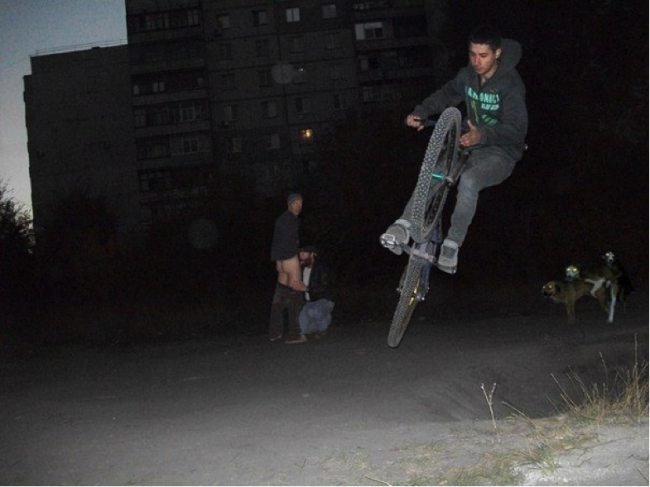 For the last five years Nicolas Parrain has been living without money. This choice led him from a life of bartending and chemistry research…