408
SHARES
FacebookTwitterContribute
If you feel like contributing, please send a message to: join@sensanostra.com

Reality takes over fiction,” says Berlin-based artist Simon Lejeune definitively, exhaling cigarette smoke into the pouring rain. If that is true of the fictional worlds created by Lejeune then we, the human race, have serious cause for alarm. Lejeune’s obsessively detailed ballpoint-pen drawings depict scenes from a dystopic future, a future where man’s inventions have devoured man himself. A future in which the border between human and machine, between virtual and reality and ‘virtual reality’ has been dissolved, and its contents have been smeared together like a soggy ballpoint pen drawing left out in the rain.

I have always drawn. When I was a kid I drew weird stuff like bodies open and faces, I was really interested in how things work, in systems, in opening things up and looking at what’s inside. I had an Uncle who worked for a company in Belgium that built fighter jets. I’d go visit him and he would open the planes up so I could see the structures inside. He was an electrician and so he also taught me a lot about informatics and what he was doing.

I grew up and began to understand that these machines are made to kill. I was still fascinated, but at the same time it scared me. I mean, it is still impressive to see them fly–bwooooh–through the sky.

The village I grew up in was built up with coal and metal factories. Those that were abandoned were great places to play. I think they have also influenced my work a lot, I still remember all of those rusty textures and cables and old machines. It was not futuristic at all but it somehow looked like a dystopian future. And all around elsewhere were these big factories with flames coming out of them, tubes everywhere, really looking like Hell, but a Hell made of metal. The new definition of Hell. In old stories of Hell it is more like demons and cauldrons and flames, but nowadays you have a totally different image, it is more a hell on earth.

It is very clear that Hell is here, and not somewhere else. Surely there is also a paradise…for those who can afford it. That’s the thing with technology. We see these things on the TV and they say “we have this really amazing technology, and we are going to save everyone!” But it is never really about saving people, it is about making those with these technologies richer. It is just a control thing. That scares me most.

Personally, I love to depict this dystopian world but I think it is scary too. I have some dreams where I am in the dystopic worlds that I draw and I enjoy it. Some people might consider it a nightmare, but I enjoy it. I don’t know why. I don’t know why I really like Giger and Akira and stuff. It’s dark, you know. Why are people so drawn to the dark?

Mostly I have dreams about being in a huge cybernetic-megaopolis, running. Running away from something. You know, those dreams where you are trying to move but you are just not moving. 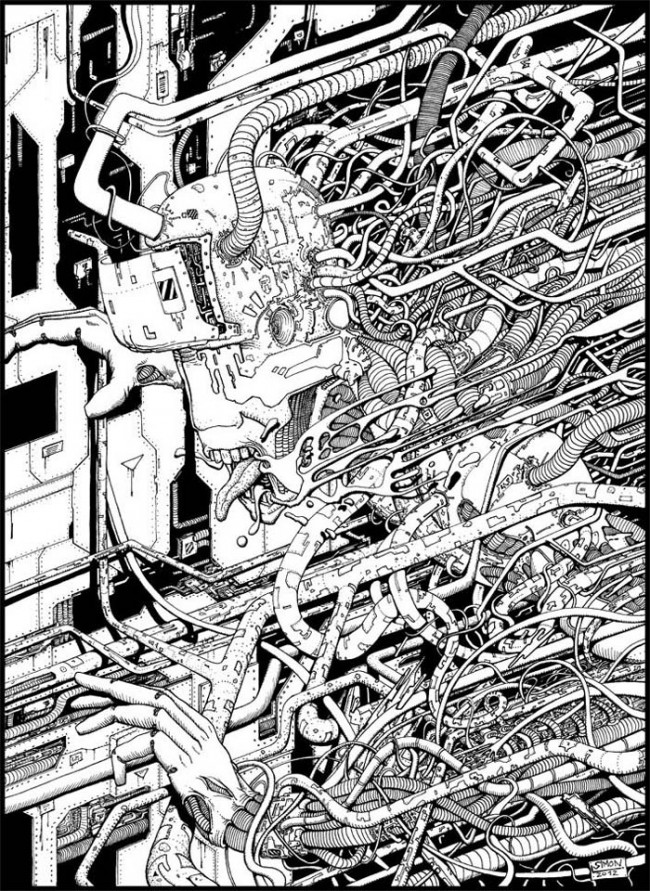 Right now I’ve started working on this concept I call the Hyperaedreaum. It is, metaphorically, a world without angles. A world that you could be accessed via many different (hyper) angles–for example, the virtual (digital), psychedelic (mental), and pseudo real world. From any of these points of view, you would still not see all the other angles. It is sort of antagonistic to Lovecraft in that way, a world entirely without angles.

My art searches for evidences in this world. It is more exploratory. We go and we have some short intrusions in it. Through dreaming, for example. Everybody can connect through dreaming.

Like I said, I enjoy these dystopic dreams, but I enjoy them as dreams. I am not happy with the idea that they could be reality. My work speaks about the future but of course I am here now, so it is responsive to what I see now. Artists of all sorts do this all the time. Orwell, Huxley, Lovecraft, Giger, Katsuhiro Otomo. It is a way to speak about the world and a call to say “look where we’re going.” That is the point: that Reality Takes Over Fiction. Always. 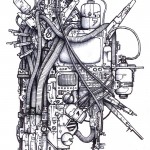 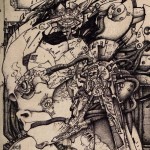 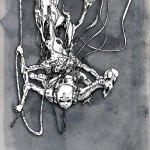 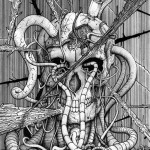 408
SHARES
FacebookTwitterContribute
If you feel like contributing, please send a message to: join@sensanostra.com

We’ve all been there: a night on the gin, a hangover of immeasurable proportions, some distant memories of a girl or guy we certainly…