345
SHARES
FacebookTwitterContribute
If you feel like contributing, please send a message to: join@sensanostra.com

Bloodlining is a way of starting a tattoo piece without using any outlines. The stencil is traced with the tattoo needle without ink thus creating scratch which serves as an impermanent boundary to shade within. Anyone who has had softer tattoo pieces done, such as portrait work, would have likely had some bloodlines.
When they first got together, Performance Artist/ Poet Stefanie Elrick arranged to meet Tattoo Artist Loren Fetterman where he lived in Harrogate, Yorkshire, and spend the night there. Loren had previously dreamt that he tied her up and bloodlined some poetry that she wrote for him onto her. That night they met, he did.
‘Written in Skin’ is a ritual performance piece. Over the course of a few weeks, Stef and Loren received and collected written submissions from all over the world about love. During a 6 hour live performance, Stef will have the pieces of writing beautifully bloodlined into her by Loren, from head to toe. We talked about the different layers and ideas that the project seeks to illuminate.

The idea came from our first romantic experience. It was a year later that we realised it would make an interesting art project and that it would be nice to allow other people to submit the words. Though it took a while to filter through and influence this project, we became interested in finding ways to use the body to speak when we saw the films of Performance Artist Marina Abramović. ‘Written in Skin’ is quite a romantic piece because of the way we got together and we like the idea of a multitude of voices and ideas being worn on the skin and sparking peoples’ interest and making them feel comfortable to share their experiences and ideas in a completely random forum.

We will keep the website as a photo diary of the healing and see where the project continues from there as we’ve had lots of ideas as we did this. Jamie Allen Price and Lydia Roberts who does amazing dark, surreal but very simple photography will come and photograph the performance. We will have a time-lapse video and a photoshoot on the following day as the writing will be most readable and obvious once the scars/scabs heal a little. However, it is more than just the event and we do not want people to just come and be shocked by the idea of bloodlining. It’s about the aftermath and the whole process, even the part where we try to get people to submit their stories. It’s been sort of a freeform project with 3 stages so we have been stressing that the live event is just one moment in the overall piece. Watching it heal is an essential and large part of the project; it’s why we wanted to do it in the first place- the regenerative process of the skin, and how all the stories are eventually absorbed into the skin. They will slowly fade away and be completely gone within about 2 weeks. It’ a nice metaphor for various things such as the way the experiences and the pain caused heals over time.

We’ve had a lot of response via submission. Some have been heartfelt, some have been quite cute, someone sent in a law clause which didn’t make sense at all in the context of what we are doing (but we put it up anyway because it is a nice quote). We also had a lot of people tell us that they don’t know what to write because their experience with love is so simple. It’s funny how people don’t think their experiences are epic enough- but that’s not what this project is about at all! Everyone’s story is more elaborate than they first think. It almost depends on where they choose to end or even begin it.

Regarding the performance itself, we’re going to have a plan beforehand of exactly what goes where and aim to fit the relevant pieces of writing to the corresponding parts of the body (like heart and head and throat) as much as we can with what we have. We have a pretty good idea of what is going on the body; it’s just placing it and making sure it’s all done in 6 hours. Some people submitted a lot of text so we will have to take snippets and essentially craft a grand master poem from everybody’s work. There will be fragments from everyone’s piece creating one giant narrative body. We’re going to have Tom Waits playing in the background because we didn’t want a foreboding, surgical atmosphere. Tom Waits’ music are surreal easy-going twisted love songs which are equally as open to interpretation. We want to have the multiplicity instead of imposing anything.

It’s going to be 6 hours of intense meditation. Any tattoo is a rite of passage but this is different from getting a tattoo as we won’t be able to communicate or take any breaks unless they are absolutely necessary. Except for the soles of the feet, everything will be done; face included. It would be a cop-out if it ended below the neck. We did a test-piece on Stef’s ribs which was a good indicator of the levels of pain and how well she will need to anchor herself in her mind to bare it. It literalises the emotional marks that people inflict upon each other at a subconscious level. It is a hopeful piece because it shows that all people go through intense and deep levels of pain because that is essential, and at the end you get something very beautiful out of it. Everything we go through and everything we feel, we will come through eventually and survive. The regeneration is the main theme/idea that we are trying to highlight.

Further, it expresses the understanding of impermanence found in Heraclitus or Buddhism, in that it communicates the particularities of individual love stories through a transient medium. Yet it simultaneously illustrates the notion of permanence found in the Platonic forms or Jungian archetypes, since part of the performance’s appeal lies in the fact that everyone knows what that spark of love feels like, regardless of who it is with or how it happens, whether it be 10,000 years ago or today, and this is further accentuated by the fact that individual stories are edited down into one master poem and lined onto one body. So as an expression of spiritual truths, both of the contrasting intuitions about the nature of love and reality are equally emphasised.

The following quote is a random idea that popped into Stef’s head from her dreams that serves as a nice metaphor for the piece:
“Woman is a well, a void, all emptiness pours inside her, fills her up.
We cast wordless wishes in and the echoes of Infinity ripple back from its womb.
From her endless depths we draw our deepest essence, we are quenched, we are sustained.
Woman is the well of the world.”

If you look at traditional gender roles, Stef will appear to be in a passive position but ultimately has a massive amount of control in her mind and over her responses. There will be questions concerning Stef being objectified because she’s a naked woman sprawled out on a tattoo chair with people coming in and watching the act, which is obviously voyeuristic in itself, but it’s also very empowering. Then you have got the active position as well. The idea that Loren is essentially doing something that people never really see will be quite graphic and violent but in actual fact, Loren is going to have to be so gentle and careful with what he’s doing- it is a very intimate trust thing. A lot of people don’t realise or don’t grasp this when presented the idea of bloodlining. I think it speaks volumes about many things and gender dynamics as well. People assume that Loren enjoys all the power but to us, in the centre of all of it, it is a very gentle, loving piece about intimacy and trust.

I think people are going to throw their own perceptions on it no matter what we’re doing. To a lot of people, I think it would be largely considered to be quite fetishistic despite that not being our motivation. Whatever ideas people project will be a good measure of our collective attitudes towards relationships and sexuality. This really is about people projecting rather than, as a performer, embodying a specific character and trying to throw that character at them. You draw something forth and become a canvas in many ways. We are curious to hear about the comments so we hope people will be honest about what they think.

Loren’s mum was shocked and she couldn’t understand why he would do this to somebody that he loved. In her mind it would be Stef chained to a cage with a bright red light with some industrial hardcore playing in the background as he carved his name into her repeatedly while the crowd threw coins or something. She slowly came to understand its value as a piece of art as she saw how people responded to the project as the process unfolded, and realised that it wasn’t a celebration of debauchery but an expression of real love and compassion.

Another thing we didn’t realise would be so tricky is what people find appropriate to display on a social platform. Once flesh and bodies are on show, you are automatically opened up to attention which is not necessarily the kind of mature and intelligent attention desired. It has been interesting trying to find that balance between what is art, what people perceive as such and what becomes just stimulation. It’s interesting how people will be very dismissive about the deeper layers and construe that their immediate reactions are the reason for the piece. That’s a difficult one to navigate, but we’re learning. Art is always a learning process. We want the potential there for a wide variety of interpretations rather than imposing our own emotional angle from the moment they enter. 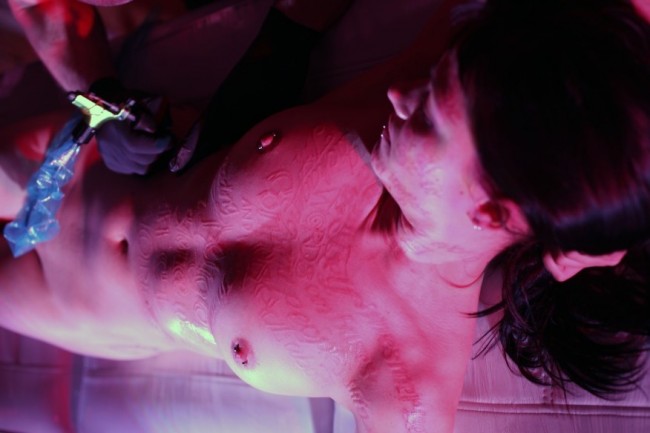 345
SHARES
FacebookTwitterContribute
If you feel like contributing, please send a message to: join@sensanostra.com

Tuomas aka Zutsuu/Teknoaidi is a Finnish hardcore techno/speedcore musician and artist. He is part of an underground music community in Finland called ‘Kovaydin.NET’ (as…